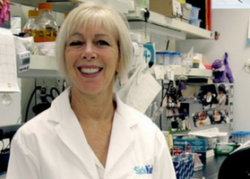 Brain damage has many different causes and very few treatments. In children and adolescents, damage to the white matter – an area deep in the brain made up of nerve fibres coated with a protective myelin sheath – can be sustained after injury, diseases such as multiple sclerosis, or as a side-effect of cancer treatment. In all cases, the white matter’s primary function as a conduit for transmitting messages is compromised, which can have lasting negative effects on development and learning.

Dr. Freda Miller, a neurobiologist at The Hospital for Sick Children (SickKids) in Toronto, has discovered a way to repair white matter that she hopes will restore some of the functions lost after brain injury. The solution involves metformin, a safe and widely-used drug for the treatment of diabetes. Miller’s multi-institutional team, which includes the labs of Cindi Morshead at the University of Toronto and Jing Wang at The Ottawa Hospital, found that this drug activates the cells responsible for white matter formation, resulting in brain repair and functional recovery.

Miller and SickKids colleague Donald Mabbott recently completed a clinical trial using metformin in children whose brains have been damaged through cancer treatments. While results are not yet published, the team is optimistic about what they will find. It was while doing this work that they began to ask whether the drug could produce a similar repair response in other forms of brain trauma – especially those injuries caused by different forms of demyelinating disease like multiple sclerosis. Through a Stem Cell Network Disease Team grant, her team will be finishing final preclinical research and launching a pilot clinical trial of metformin as a repair therapy for children and youth who have a particular form of vision impairment commonly associated with multiple sclerosis. By measuring the functional recovery of the eye, the team will be able to determine whether metformin could be used as a new form of treatment. If successful, this trial will lead to larger studies for children and adults with a broader range of demyelinating conditions.

Freda Miller’s project is part of the 2018-19 Disease Team Research Agreement Program providing $1.1M for seven projects. A total of 61 investigators (24 Investigators and 37 Collaborators) at 18 institutions and 58+ trainees are engaged. Multidisciplinary teams supported through this program are focused on novel cellular or stem cell-related therapeutic approaches to treat disease. Commercialization is an important component for this program, as projects must demonstrate a path to market or clinic. Research supported from this competition is also addressing treatments for diseases such as type 1 diabetes, septic shock and blindness.