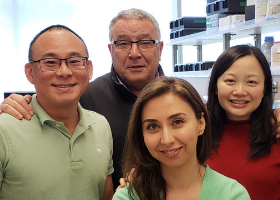 About one in every 2,000 infants in Canada dies quietly in their sleep with no known cause. These sudden unexplained deaths in infants (SUDI; formerly called SIDS) are devastating to families and have perplexed the medical community for decades. Recent research, however, points to cardiac arrest as a potential cause in certain cases.

Dr. Glen Tibbits, at Simon Fraser University and BC Children’s Hospital Research Institute, received an SCN Impact Program award to explore this further. His goal was to develop a platform that could show that sudden cardiac arrest is a likely cause of specific infant deaths for which no cause could be identified, despite exhaustive post-mortem examinations (referred to as “autopsy-negative”). He partnered with other researchers in British Columbia, Alberta and Ohio to develop a platform to assess genetic factors that may be contributing to incidences of SUDI. Tibbits and his team previously found a genetic variant in a number of “autopsy-negative” infants.

However, it was unknown whether this could be a critical factor in their death. Using an array of techniques, including human induced pluripotent stem cells and genome-editing, the team was able to grow sheets of heart tissue comprised of beating cardiac cells. The heart cells carrying the mutation beat abnormally when stimulated to contract at higher rates, much like the heart would when under stress. Such arrhythmias can be life-threatening in newborns and indicate a probable cause for SUDI among those who carry the genetic mutation.

“While we’re still a long way from removing the risk of SUDI altogether, this discovery will help us identify screening methods and strategies that families and health practitioners can use to help reduce the incidence of SUDI among those who carry the genetic variant.”

The platform also has broader applications for the future, including using it to help identify other genetic anomalies that may be contributing to the sudden cardiac arrest in infants or even adults.