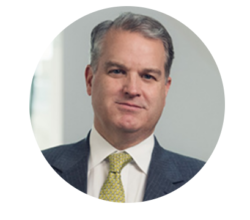 Gordon McCauley, BA, MBA, ICD.D was appointed President and CEO of adMare BioInnovations in 2016 after serving on the Board for four years. Mr. McCauley is an accomplished life science investor and executive.

He has served as President and CEO of Viable Healthworks Corp., a national healthcare service business; Allon Therapeutics Inc., a neuroscience biotechnology company that developed novel therapeutics from pre-clinical to global phase 3 studies before being sold; and as Co-Founder and Partner of NDI Capital, an institutionally backed life-science investment fund. Mr. McCauley has also been a senior executive of several successful healthcare enterprises, and a senior advisor to several prominent Canadian political leaders.

Mr. McCauley has served as a Director of a number of private and publicly traded companies. Currently, he is a Director of adMare (and a number of its portfolio and subsidiary companies), BIOVECTRA a leading Canadian biotech and pharmaceutical CDMO, Chairs the Board of both BIOTECanada, Canada’s national biotechnology industry organization, and CGEn, Canada’s national genomics enterprise, and is a Director of Montréal InVivo. Mr. McCauley has previously served as Chair of Life Sciences British Columbia, Acetech, The Toronto Rehab Foundation, and was a founding Director of the Toronto Rehabilitation Institute. In 2008, Mr. McCauley was the first Canadian appointed to the Board of The Biotechnology Industry Organization (BIO) in Washington D.C., where he served in leadership positions until 2013.

Gordon earned a BA in Political Science from McMaster University, an MBA (with Honours) from IMD in Lausanne, Switzerland, and holds the ICD.D certification from the Institute of Corporate Directors and the Rotman School of Business at the University of Toronto.