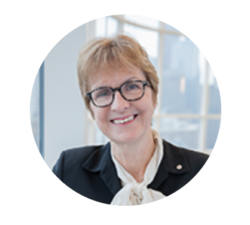 Dr. Janet Rossant, a world-renowned expert in developmental biology, is the definition of a trailblazer. She started as the Gairdner Foundation’s President and Scientific Director on May 4, 2016.

Widely known for her studies of the genes that control embryonic development in the mouse, Rossant has pioneered techniques for following cell fate and altering genes in embryos. This work continues to resonate in medical genetic research. Her current research focuses on stem cell development and cell differentiation in the developing embryo, important areas for the study of birth defects as well as regenerative medicine.

Dr. Rossant trained at the Universities of Oxford and Cambridge, United Kingdom and has been in Canada since 1977, first at Brock University and then at the Samuel Lunenfeld Research Institute within Mount Sinai Hospital in Toronto, from 1985 to 2005. She served as Chief of Research at SickKids from 2005 to 2015 and retains a research lab there. Dr. Rossant has been recognized for her contributions to science with many awards, including the Ross G. Harrison Medal (lifetime achievement award) from the International Society of Developmental Biologists, the Killam Prize for Health Sciences, the March of Dimes Prize in Developmental Biology, the Conklin Medal from the Society for Developmental Biology, the 10th ISTT Prize from the International Society for Transgenic Technologies and the 2018 L’Oréal For Women in Science Award. She is a Fellow of the Royal Societies of both London and Canada, and an International member of the US National Academy of Sciences.