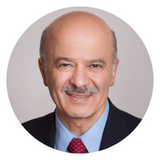 Reza Moridi served as Ontario Minister of Training, Colleges and Universities, and Minister of Research, Innovation and Science. He also served as the Parliamentary Assistant to the Minister of Energy, and Chair of the Cabinet Committee on Education, Skills and Economy. He first elected to the Ontario Parliament in 2007 and re-elected in 2011 and 2014.

Reza is a Senior Fellow at Massey College, University of Toronto and serves as Senior Advisor for Chintoronto Holding Company.  He serves on several volunteer boards, including Royal Canadian Institute for Science, Radiation Safety Institute of Canada, and York University Faculty of Science Dean’s Special Advisory Board.

During his career with the government of Ontario, Reza was instrumental in transforming the innovation ecosystem in Ontario. He initiated establishment of Campus Linked Accelerators in all Ontario universities and colleges and secured substantial funding for MaRS to complete construction of the West Tower. He helped establish Ontario Institute for Regenerative Medicine and Vector Institute for Artificial Intelligence and managed to secure significant funding for Autonomous Vehicles, 5G digital infrastructure, cybersecurity, Big Data and Advanced Manufacturing.

Reza is a graduate of Tehran University, Iran (BSc and MSc) and Brunel University London, UK (MTech and PhD). He received an Honorary Doctorate from Odlar Yurdu University, Baku, Azerbaijan.

Reza was a Charted Engineer (CEng) and Chartered Physicist (CPhys) and was elected Fellow of the Institute of Physics (FInstP) and admitted as Fellow of the Institution of Engineering and Technology (FIET) for his original contributions to physics and engineering. The Health Physics Society of the USA designated him as a Fellow of the Society and the Canadian Nuclear Society presented him with the Education and Communication Award.

Reza has also received numerous awards and recognitions for his extensive community and humanitarian services.  In recognition of his contribution to Canada, he received the Queen Elizabeth II Diamond Jubilee Medal, and the City of Richmond Hill honoured him by naming a street as “Urmia Avenue” – after the city in Iran where Reza was born.